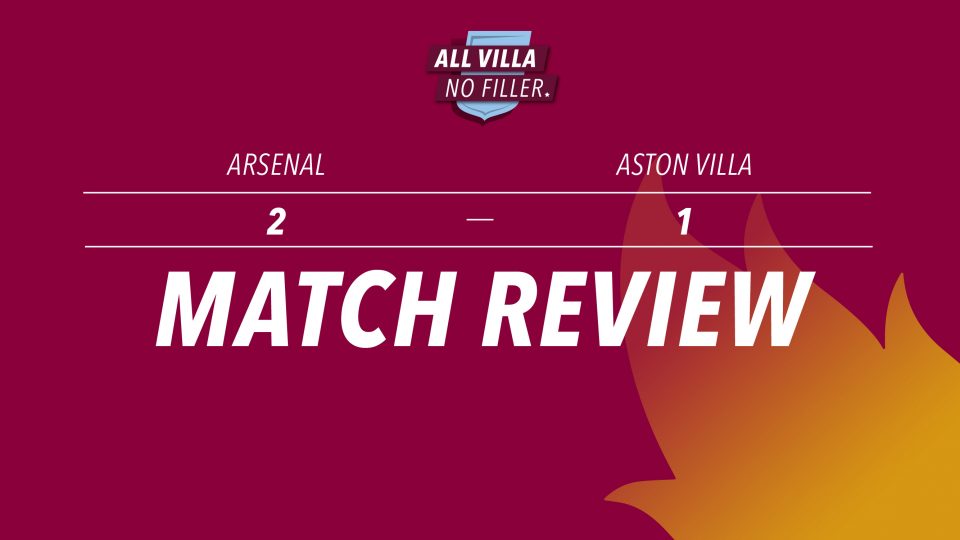 Another day, another defeat. What more did we expect in North London? Aston Villa have looked a rudderless rabble in most games this season. A ship sailing upon stormy seas without a mast, a compass, or a helm. Should this run of form continue Villa are well on course to walk the plank out of the Premier League and tumble back down into The Championship, where awaydays at Rotherham await once more (in fairness, that could be fun, though we’ll need the sweet taste of Bovril to warm us up in mid-November).

Arsenal battered Villa on Wednesday night. It could have been 6-1 or 5-1, but somehow ended up being a flattering 2-1 defeat for Steven Gerrard’s team.

There was no lack of effort from the players on the night. They ran a lot and made plenty of tackles. But it’s all a bit Sunday League to be cheering on a crunching challenge, isn’t it? The main problem was that every time a Villa player got on the ball their passing options were minimal. Not for the first time this season Villa looked clueless in possession. The fact this continues to happen in every game must surely come down to tactics and the shape of the team. The players cannot be this bad. They’re Premier League players for goodness sake! Even if you saw the worst Prem player down your local five aside league you’d think you were in the presence of a living god. You’d end up like Roy Batty from Blade Runner telling some dumbfounded ex-cop that you’d seen things they wouldn’t believe, Bosko Balaban scoring ten goals in one half, you watched Marco Boogers become top scorer in the local Power league.

Villa have hired so many coaches at Bodymoor Heath they could populate a small city. It is a mystery, therefore, how a team with so much coaching expertise currently looks like a side that isn’t being coached.

At Arsenal, these tactical deficiencies were evident whenever Villa made it into the final third. Occasionally, Leon Bailey would make a run, get the ball, do a trick, and then pass it backwards, meaning the attack went nowhere; or Jacob Ramsey would approach the area, run into about three Arsenal defenders and then pass it backwards. Emi Buendia would come deep, get the ball and find nothing to aim for, or just make a poor pass. Ollie Watkins ran around gamely but he had nothing to work with either. It was like watching football from The Simpsons when Mexico and Portugal just passed the ball around and did nothing with it for an entire match.

What is this? Are the players working on their approach play in training? What are the coaches telling them to do? How come Villa’s attack never works? Are we just telling the players to try and win corners so that maybe ‘Deadly’ Douglas Luiz will score direct from a corner again? Is that it? Working this out is as complex as figuring out the meaning of life or why anybody thought pineapple pizza was a good idea (don’t @ me about this you pineapple pizza loving weirdoes).

Somehow Villa did score at the Emirates. Unfortunately, it wasn’t through any kind of coherent, intricately worked brilliance between our expensively assembled squad. Instead, Brazilian international Douglas managed to pull off the rare trick of scoring direct from a corner for the second week running. It is sobering to think our biggest goal threat currently comes from a whipped corner delivered by the sure foot of Douglas.

At the back, as mentioned in this post, when the defenders have possession they’ll pass the ball around aimlessly for a while and find they have almost zero options to play to in midfield. Are the defenders poor distributors? Or are the midfielders just not available for the pass? Is it a combination of both? It’s just an astonishing thing to watch every single game without the coaches fixing these problems, particularly as Villa started with the exact same line-up which got outplayed in the centre by Crystal Palace just two weeks ago.

Villa looked light years away from a dynamic, pulsating Arsenal side who smartly targeted the wide areas (which is inevitable when Villa set up to play so narrow all the time).

There were occasions last season when the narrow approach worked, particularly with Marvelous Nakamba operating as a CDM. However, Villa’s form has been poor since around March and that in part comes down to having no width. Opposition teams know Villa can be hurt in wide areas and will always target these positions. It leaves Lucas Digne and Matty Cash with unforgiving roles where they must constantly bomb up and down the wing, acting as crucial attacking players, whilst also trying not to get caught on the break.

Perhaps this will work itself out. Maybe the players will all click one game, pick up a big win and then go on a great run of form. But such dreams don’t look like they will come true any time soon.

Arsenal looked like a very good side. They often swarmed over Villa and were well drilled, particularly in the first-half. The noise level at The Emirates also suggested this is a fanbase that knows something positive is happening in North London. However, Arsenal did not put Villa away as quickly as they would have liked and allowed the Midlands side back into the game in the second-half. Arteta’s side has won five games this season, but they have played struggling Villa, Bournemouth and Leicester, while conceding a number of goals. They are close to being a special side, particularly with Gabriel Jesus and Oleksandr Zinchenko signing up to the Mikel Arteta project, but they might just be a couple of players short of challenging the Premier League’s very best.

It is also a bit of a narrative in some quarters that Arteta started last season with three losses, which is somewhat reflective of Villa’s current form. In the early days of Gerrard’s Villa reign it was fair to compare his middling start to Arteta’s because both had taken over a side in serious transition and needed time to put their marker on the team (though the Spaniard won the FA Cup soon after taking over). Arteta had a terrible run of form in his second season at Arsenal and started last term with three straight losses. The main issue with the Gerrard/Arteta comparison, however, is that Arsenal looked like they had an idea of what they wanted to be even if they were a few clever signings away from achieving it. In contrast, Villa just don’t have an identity. It is so difficult to work out what this team is supposed to be other than narrow and ponderous. Also, after Arsenal lost their opening games last year they went on a long unbeaten run and ended the season achingly close to a Champions League place. Is there any chance that might happen with Aston Villa this year? There’s more chance of Lionel Messi signing for Birmingham City.

Who knows, maybe it will all click one day (and god we hope so) but it takes serious optimism to believe Villa are closing in on that moment any time soon.

Look, yeah, this article hasn’t been very positive (come on, it’s hard to be too cheery when Villa are 19th in the Premier League – but, hey, at least we’re not bottom of the league, right? That’s something to cling to, ain’t it? Although we’re below a team that lost 9-0 and just sacked its manager in August, even after they beat us. Yeesh.) Despite this lack of optimism, we can at least celebrate the arrival of Leander Dendoncker from Wolves and Jan Bednarek on loan from Southampton.

Dendoncker is a physical midfielder who can also play in defence (maybe we’ll play a back three at some point?). He adds Premier League experience and grit into Villa’s weak central area. His price tag is reportedly around £12 million, which is pretty low in the world’s most financially overpowered football league. Will the Belgian international’s arrival lead to a change of shape by Gerrard? Could he be tempted to play Dendoncker and Boubacar Kamara or Douglas Luiz together in central midfield as a double pivot? Will we see something different? It is very hard to predict how Villa will line up these days, so we’ll just have to wait and see what Gerrard has planned.

Bednarek is another player with a lot of Premier League experience and international caps. He gets to join up with Polish team mate Matty Cash and replaces the injured Diego Carlos. Villa were mostly forced into this move by Carlos’ injury and so it looks like another decent signing considering the unfortunate circumstances.

Villa’s transfer window started off in impressive fashion. Kamara and Carlos filled positions we desperately needed to fix early on in the window. Ludwig Augustinsson provided experienced back-up for Lucas Digne, even if he’ll (likely) rarely feature. Robin Olsen and Coutinho both signed permanently (let’s see how the Brazilian’s transfer plays out long-term). But the start to the season has blown away all that pre-season positivity. It has also shown up how Villa lack pace out wide (only Leon Bailey could really be described as an out and out winger) and the fact the sporting director/manager/whoever hasn’t fixed that glaring issue is concerning…like, really perplexing. It is hard to envision how Villa won’t be anything other than a ponderous and predictable team unless Gerrard and his army of coaches can work out a way to make this team flow.

Anyway, up next (let me just check my notes here) it’s, er, um…oh CHRIST….it’s……Manchester City. Oh great. Will Erling Targaryen lay siege to Villa Park and score another hat-trick (are we the Farmers League now?) or can our band of heroes avenge last season’s 3-2 turnaround? Well, gulp, see you Saturday everybody.

ASTON VILLA’S GROUNDHOG DAY: IS TIME UP FOR STEVEN GERRARD?