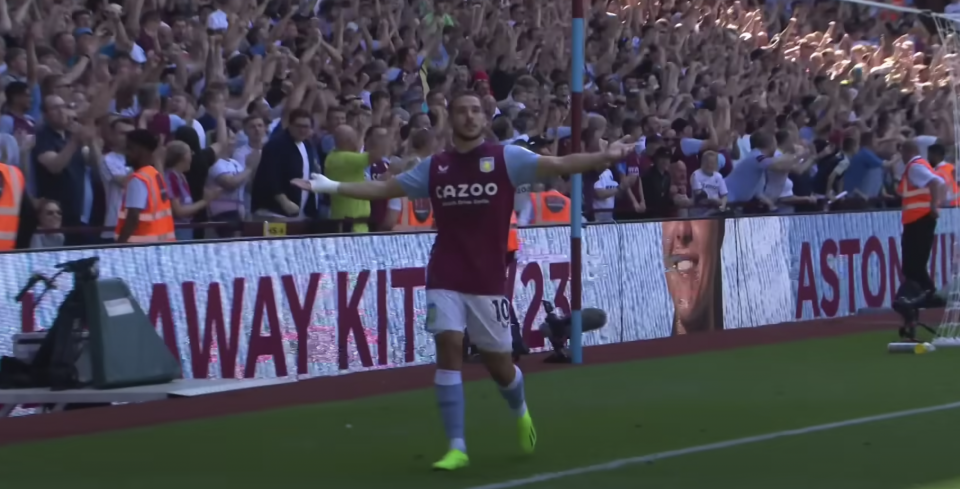 I have just returned from the tattoo parlour where I got ‘EMI BUENDIA MUST START EVERY SINGLE GAME’ inked on my face.

As I write through the burning pain of a pro-Buendia tattoo setting into my skin, I am left to ponder the Argentinian’s game-changing performance in Villa’s 2-1 win against Everton.

Buendia, once again, started on the bench. Villa began the game with a front three of Ollie Watkins, Danny Ings and Coutinho. Throughout the first hour of the match, Villa looked somewhat ponderous in attack as Everton sat with three juggernauts at the back (who were also supported by two deep-lying wing-backs). Although Villa were not particularly threatening during that period both Watkins and Ings made at least one effective contribution. Watkins created the opening goal (after a super ball from John McGinn) and Ings did brilliantly to finish after it seemed the chance had gone.

However, the third part of that attacking trident was almost anonymous for the second week running. Coutinho, who has been brilliant at times for Villa, could not exert any influence on the game and seemed to get lost among Everton’s sea of testosterone-fuelled humanity in the middle of the pitch.

Other than the occasional bursting run from Jacob Ramsey there was little to excite about the team’s attacking play. You could be charitable and point out the UK was hotter than the cracks of Mount Doom and so the players were never going to play with much intensity, but that would also overlook just how much Buendia changed the game.

When he entered the pitch, Buendia immediately sought to impose himself, bending time and space to his will. The playmaker demanded the ball from deeper-lying players and drove at the opposition. He encouraged Villa to pass and move. He also created opportunities with three key passes and scored the winner.

The 25 year-old has deserved a starting spot for most of this calendar year. He has performed well since January and has the potential to be a talisman in a way that is not too dissimilar to Jack Grealish. This is not to argue that Buendia is as good as Grealish, but there are similarities in how they make a team more dynamic in the final third.

The time has surely come for Buendia to consistently play full games every week. There could be an argument that he is better as an impact player, but how will we ever truly know what he can do over 90 minutes if he doesn’t get the chance to start on a consistent basis?

Head coach Steven Gerrard has every right to pick Coutinho ahead of Buendia, but it is getting harder to argue against the Argentinian’s inclusion in the first XI. If he can start in a long run of games, Buendia could become the talisman and creative fulcrum Villa’s frontline desperately needs.

Last week, a bear cub in Turkey went full Woodstock ’99 and was rescued when it was found hallucinating after it consumed too much mind-altering rhododendron honey (also known as mad honey).

The unfortunate bear’s confused and bewildered state was similar to the Villa defence whenever a corner came flying into the area at the weekend.

Last season, Villa were okay at defending set-pieces, finishing tenth in the league for fewest goals conceded (13 overall). Manchester City, a freakish team built on the most incredible wealth ever accumulated by any football team ever, conceded just one set-piece goal all season, while Chelsea were second best on four. Wolves also impressed with just five conceded. The worst side last year was Everton, who leaked 22 set-piece goals. Leicester City were not far behind on 20.

Villa’s last three games have been concerning in this regard. The pre-season friendly against Rennes hinted there could be problems as Villa often struggled to deal with high balls sent into the box. Indeed, Rennes’ goal came from a corner.

Gerrard’s side followed up the Rennes friendly with an abysmal display at Bournemouth. As happened in France the week before, Villa conceded an early goal from a corner, with Jefferson Lerma left free to score from close range. It was a mistake from which Villa did not recover at the Vitality Stadium.

Villa’s defence went full mad honey bear again on Saturday. In the first-half, every ball that was sent into the area caused Villa problems and they were lucky not to concede when Anthony Gordon’s close-range effort was ruled offside.

Has one bad experience against Rennes led to a crisis of confidence? Are the defenders communicating? Are they physical enough? Does the usually incredible Emi Martinez perhaps stick to his line too much? Whatever the answer, the team have to fix this issue quickly otherwise every tall player in the Premier League will be counting down the days to playing Villa.

It is still difficult to work out Villa’s best line-up. Both Steven Gerrard and former manager, Dean Smith, have struggled to find the right formula.

Against Everton, Gerrard went with a diamond formation that saw Coutinho sit behind Watkins and Ings. This set-up worked in spells last season, with a notable run of wins against Southampton, Leeds and Brighton, but those victories were followed up by four losses in a row. The nadir of that losing run came when Villa’s diamond formation was ripped apart by Antonio Conte’s resurgent Spurs side in a 4-0 hammering. (I went to a live comedy show straight after that game. I was so miserable I didn’t laugh once and was badly tempted to heckle every performer with, ‘WHO WAS MARKING SON FOR THE FOURTH GOAL?’.)

There were warning signs about the diamond in pre-season. Villa tried to employ it against Manchester United in Australia but were badly outplayed by Erik Ten Hag’s men in the first-half. Gerrard’s team were 2-0 down at half-time having failed to find any way past United’s midfield (after United’s horrible start to the season, how bad does that sound now?). Villa moved to a 4-3-3 in the second-half of that friendly and dominated the game. The standout player, Leon Bailey, scored an excellent goal and looked ready to start the season strong for Villa.

Bailey’s form saw him included at Bournemouth, but Villa’s 4-3-3 looked bereft of ideas against the Cherries back five. The players resorted to lumping the ball forward, where 6’3 defender Chris Mepham was ready to clear everything with his clunking great head. It was not our finest hour.

It is a concern that two formations have malfunctioned in three games. Villa were really poor in the diamond against United and looked clueless in the 4-3-3 at Bournemouth. Gerrard has a difficult task ahead working out his side’s best approach, but he may have to experiment further in the coming weeks.

Gerrard made the right call to return to the diamond formation against Everton’s back three, but will it work against Crystal Palace’s back four this weekend?

Well, what a downer.

The new £26 million signing, Diego Carlos, was the physical, ball-playing central defender Villa had badly needed. His experience of winning trophies and performing at the highest level would likely have proved invaluable for Villa this season. Unfortunately, Carlos ruptured his Achilles tendon against Everton and could now miss the entire season. Villa fans will wish him the best in his recovery.

According to The Athletic’s Gregg Evans, Villa are on the lookout for a new defender before the transfer window shuts on September 1. However, Evans reports Villa will not spend to the degree they did on Carlos and a loan may have to do.

Sporting Director Johan Lange will almost certainly work overtime throughout the next few weeks to find a player who can improve Villa’s defence but it will be no simple task this late in the window. Villa have been linked with Arsenal’s Rob Holding, Belgian international Jason Denayer, and Marseille centre-back Duje Ćaleta-Car.

Tyrone Mings will almost certainly start alongside either Calum Chambers or Ezri Konsa in Villa’s next match at Crystal Palace. Elsewhere, could Carlos’ injury provide an opportunity for Josh Feeney this season? It is probably too early for the 17 year-old England youth captain to start at centre-back in the Premier League and a loan option seems more sensible. Scottish teenager, Kerr Smith, is another exciting prospect to look out for.

And so, Villa’s brave band of brothers venture onwards to their next game at Crystal Palace. Last season’s 2-1 win at Selhurst Park was one of the best games played under Gerrard. It saw both Jacob Ramsey and John McGinn cover across throughout the game to help the full-backs stop the threat of Palace’s talented wingers. Villa may well try something similar this weekend.

Boubacar Kamara will also be very important. If Palace start with Eberechi Eze playing off the Palace striker, Kamara will be largely responsible for keeping him quiet. Fortunately, Kamara has looked excellent so far. He was the best player against Bournemouth and probably man of the match in the Everton game, too. He has a knack of breaking up play rapidly but his distribution is his most eye-catching skill. Kamara’s short and long passing range was supreme during the Everton win. His signing already looks a serious achievement for Villa. (Manchester United were linked with Kamara. They didn’t sign him and now they’re desperately scrounging around for a player of his exact profile. What a shambles.)

Let’s hope Villa can follow up last weekend’s victory with another solid performance at Palace. Up the Villa.

ASTON VILLA’S GROUNDHOG DAY: IS TIME UP FOR STEVEN GERRARD?